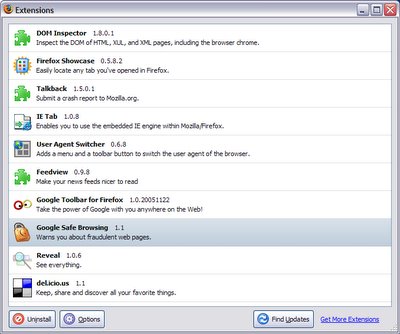 Just in case anyone’s interested (unlikely, I know), these are the Firefox extensions that I have installed. I’ve taken this screenshot from my Windows box, but they’re also installed (with the exception of IE Tab), on my SUSE and Fedora Core Linux setups.

I’m now going to go through and say what I find useful about each one.

Comes with Firefox I think, so I don’t really know about this one.

This is a really cool extension, a bit like IE7’s Quick Tabs that allows you to see and organise all your currently opened tabs/windows with a press of F12. I originally blogged about this here, back in February, but I still think it’s cool.

Another one that comes with Firefox, for sending bug reports back to Mozilla. Not too interesting really.

This is useful for those stupid sites that don’t work properly in Firefox, and you’re forced to use the dreaded IE (just be careful of the security vulnerabilities). It loads the desired page inside a Firefox tab, just using the IE rendering engine. Of course, this one works only on Windows, so it does mean those stupid sites might force me to use a different computer. Grrr. Open standards, people.

This is the first place to go if a stupid site says “please open this page in Internet Explorer and try again”. Grrrrrr. It simply switches the User-agent header sent by Firefox, so it can ‘pretend’ to be IE, while really still being Firefox. Most stupid sites work when you do this, so that’s why it comes first. And cross-platform too.

This is so cool, and really should already be in Firefox. Hopefully something like this will get into Firefox 2.0. What it does is it creates a nice GUI view of an RSS or Atom feed, so that if you view a feed directly (for example peterwebdev.blogspot.com/atom.xml) it will display a nice Safari-esque page with the latest stories ordered by date, rather than the ugly XML source. Go on, try it.

Now this is very nice. A neat anti-phishing extension from Google, exclusive to Firefox that gives you an alert if you are on a suspected phishing site. I’ve never needed to use it yet, but it’s always good to know you’re safe. Privacy people/paranoids, you might want to steer clear as it does have to send the URLs you visit to Google, although they promise they don’t keep this information.

Quite cool, it gives you a ‘visual history’ with screenshots of pages you’ve visited, for example, hovering over the back button shows a mini-screenshot of what the last page you visited looks like. Very useful if you forget what a site’s called, but you know what it looks like. It also has a handy triple-click magnifying glass feature, so you can get closer to your webpage.

Finally, the extension for the popular Web 2.0 social bookmarking service del.icio.us. It gives you tagging features built directly into Firefox with a tag button for your toolbar and new menu. Admittedly, I don’t use this that much, but it does come in useful from time to time.

Whew! Well, there’s my Firefox extensions, I’d love to see some comments sharing your favourites too.

‹ Text Editor
What? Vista blocked in the EU? Not likely ›