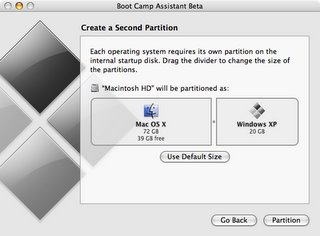 The patch works a bit like the hacked-up bootloader for Windows XP, developed by some enthusiasts to try and get Windows running on some Macs, which was largely a success. Boot Camp, however, provides a GUI (graphical user interface) for installing Microsoft Windows alongside Mac OS X. From the official Apple press release:

Available as a download beginning today, Boot Camp allows users with a Microsoft Windows XP installation disc to install Windows XP on an Intel-based MacÃ‚Â®, and once installation is complete, users can restart their computer to run either Mac OSÃ‚Â® X or Windows XP. Boot Camp will be a feature in ‘Ã‚‘Leopard’,Ã‚’ Apple’Ã‚’s next major release of Mac OS X, that will be previewed at Apple’Ã‚’s Worldwide Developer Conference in August.

So in Mac OS X Leopard, you will have a dual boot system built directly into the Mac operating system. Apple go on to say that:

“Apple has no desire or plan to sell or support Windows, but many customers have expressed their interest to run Windows on Apple’Ã‚’s superior hardware now that we use Intel processors,” said Philip Schiller.

This seems quite a big step to take for Apple, who seem to be embracing the idea that people will switch to Mac if they can run their Windows applications at the same time. Robert Scoble (a Microsoft employee) seems to think that Apple are listening to bloggers, and have made this decision as a direct result of what people want, thinking it might boost Mac sales.

Will it boost Mac sales, and get more people using Macs? Or will people just buy nice-looking hardware to run Windows on? It seems only time will tell what this momentous move by Apple will do for it, or against it. No official word from Microsoft about this yet, but I’ll follow up when there’s news.