OPML is really cool. In case you don’t know, OPML is an implementation of XML that basically produces a list of feeds (RSS, Atom and the like). Now I use Google’s Personalised Homepage (also known as Google IG) to track my feeds. It’s not quite as featured as Google Reader, in that it doesn’t natively support OPML import/export. Thankfully, there is a cool plugin for your Personalised Homepage called OPML Export. It’s a tiny bit of JavaScript that extracts a list of your feeds and sends you an OPML file.

The aim of exporting the list of my feeds was so that I could try out some different feed readers for a change, to see if they were better (I’m sure there are many better ones). OPML file in hand, I tried importing into Google Reader. Unfortunately, it wouldn’t accept the OPML file, but after adding an XML line to the top of the file, it successfully imported my feeds. 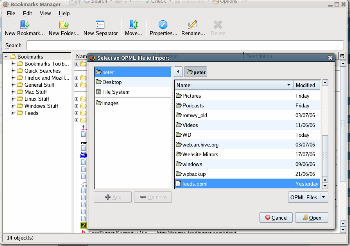 The next thing I wanted to have a look at was Firefox Live Bookmarks. I knew about this feature, but I hadn’t used it very extensively. Thanks to a neat Firefox extension called OPML Support, I could import my feeds as Live Bookmarks. One gripe. It imported them all into the root of my bookmarks. I tried to batch move them to a Feeds folder, but batch moving caused Firefox to crash (bug do you think?), so I had to move the Live Bookmarks one by one into my Feeds folder. Thank goodness there’s only 30 odd and not hundreds.

Well, now I’ll try out some more feed readers – desktop and web-based – and see if I find a better solution than Google IG.