So, Vista hit the shelves yesterday. Now, anyone that knows me even a little bit will know that I sometimes indulge in a little healthy Microsoft bashing now and then, but today I’m going to try and be balanced.

I could rant on and on about how Vista is good, and at the same time how it’s bad, but for now I’m just going to share with you three of the things I like and three things I don’t like about Microsoft’s new release. Bear in mind that the last version I used was Release Candidate 1 and not the final version, so some of what I say might be out-of-date or based on the pre-release version.

I know, it’s annoying – really annoying – if you come from a run-everything-as-admin background, but in my opinion, UAC is the single feature of Vista most likely to help curb the torrent of malware that gets thrown at Windows from spreading.

In case you don’t know, UAC is when those dialogue boxes pop up asking you to confirm an action when it needs administrator permissions. I think at the moment, the dialogue pops up far too much, but hopefully in time, third-party applications will become more sensitive to needing admin privileges and will require the user to escalate rarely.

It’s what’s been in Unix forever, and it’s finally made it to Windows – controlled privilege escalation, turned on by default out of the box. And thank heavens it’s finally like this in Windows.

There’s no hiding I hate Internet Explorer with a passion, so maybe the heading for this section should actually be ‘Important’ and not ‘Good’. As much as I hate to say it, IE7 is important. Definitely not innovative or good, but important.

It’s by no means a good browser from a standards-compliance or web developer perspective, but it will bring the average computer user out of the browser dark ages and give them basic functionality like tabs and integrated search. Jut a shame about the rendering engine, the (imo) ugly UI, ActiveX, standards incompliance… 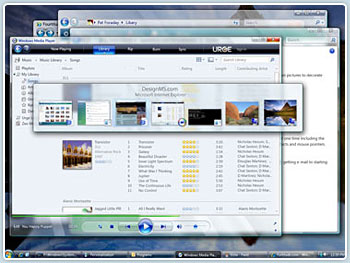 Aero is beautiful. I would argue it’s not quite as beautiful and elegant as something like Beryl, but the glass effects, transparency and new UI elements are nice.

It’s about time Windows had a bit of a visual refresh – after five years of Fisher-Price blue, and I think the new Aero effects have been done right. Not everything about Vista’s new UI is so great in my opinion though, so read on to the end of the bad section…

It still exists. ActiveX is a proven security risk, a stupid attempt at building a Microsoft proprietary extension to the web and is just generally one of the worst ideas Microsoft have ever executed. ActiveX should die. That’s all.

How is anyone else supposed to compete with Microsoft being able to push their stuff and abuse their ~95% desktop OS market share to push for dominance elsewhere? It’s like browser wars all over again, except Microsoft now get to use your screen space to advertise their products over competitors, simply because they control your OS. Bad.

Don’t get me wrong – I love Aero and I said that earlier. This is a different rant. So, in Vista menu bars aren’t ‘cool’ any more, according to Microsoft. So, MS have gone and hidden them in their apps – IE, Explorer and some of the newer offerings feature a toolbar and no menubar.

Oh – except for some apps. Oh, they’re different. These programs still have menu bars underneath the title bar as normal. For the apps that come out of the box, it’s pot luck whether it has a menu bar or not, and there appears to be no consistent reason for an app to have or not to have menu bars. Add to that third party software developers, and in 6 months we’ll all be confused looking for stuff. Does this application have menus or not?

That’s just one example – some apps have glass extending beyond the standard window frame and into the navigation button area etc, like IE and Explorer. It’s a nice touch and a good use of the new transparency (if just a bit ‘inspired’ from OS X Tiger’s unified look).

But some apps, don’t have the glass extensions, and have a different colour instead for that section of the window with the navigation controls (Windows Media Player, Photo Gallery et al). Again, no apparent reason why this is done either.

Seriously, I could go on forever, and that’s just about this issue.

I don’t want to end on a bad note – Vista is looking to be a very good release for the most part, and there are plenty of things MS are doing well, and plenty of things they’ve finally addressed after some time. It’s disappointing frankly that we haven’t seen some things originally promised, like WinFS, especially when you consider the time Vista’s had in the oven, but it’s still a strong product.

Vista won’t change my quest to expel the idea that PC == Windows, neither will it fix everything. Neither will it make me go back to using Windows as my primary OS. My dual boot system is currently running XP on the Windows side of it too, and I won’t be upgrading to Vista soon. Partly that’s the extortionate cost of the different versions, and my over-security consciousness wanting me to wait for the SP1 release.

Still, Vista is an important turning point for the whole computer industry and maybe we can use this opportunity to make things better and give me less reasons to hate Redmond and a harder job to bash them.