There’s no secret that I prefer KDE over Gnome on my Linux desktop (and I did use Gnome for some time, then decided to switch back).

But I still love Firefox – it’s by far got a better rendering engine than Konqueror (KHTML might be fast but rich-text editing and good rendering is important to me) and of course I can’t live without extensions!

But Firefox is written using GTK, the graphical application toolkit mainly used for Gnome, meaning it would look out of place on KDE. But for a little piece of software called the GTK-QT-Engine. It forces GTK to be rendered in QT (KDE’s native GUI toolkit).

This was perfect for most apps, but there was a small glitch with scrollbars on Firefox that was annoying (at the top there’d be one button that worked fine; at the bottom there’d be buttons for both up and down, but only the down button worked). Well, a routine Fedora update and there’s a new option to fix that in the KDE Control Centre. Good work, people. 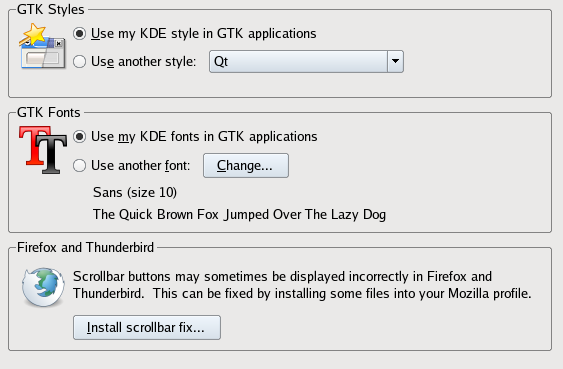