Linux should be in every school

Linux is doomed as a realistic challenger to Windows on the desktop if open source activists (yes, that would include me but I’m still in school) don’t get Linux into schools.

With the growing number of desktop-friendly, easy-to-use distributions like Ubuntu, I see no reason why the government shouldn’t at least carry out a pilot study into running Linux on the desktop in schools. Think of the money that the taxpayer could save on Windows licences. Yes, OK, getting Linux people to support the networks might cost a bit more, but it is worth looking into this possibility.

I think more home users would be convinced to use operating systems other than the mighty Microsoft Windows, if they knew about them. With the open source community virtually unable to advertise Linux as a desktop platform (we need a corporate sponsor here *cough* Red Hat *cough* Novell), it will be very hard to actually get people to realise that there are alternatives to running Microsoft Windows on their desktop.

Not only do people not know about the alternatives to Microsoft Windows, people in school (speaking from my personal experience) aren’t adequately educated about the whole open source movement. ICT (why the extra C?) seems to be all about how to use Microsoft Office, and I understand that using an office suite is an important skill, but who says it can’t be OpenOffice? The open source movement just isn’t in the curriculum.

I’m not saying Windows should be banished from everywhere. I’m an open source kind of person, but I do believe there is still a place for proprietary software. So before you judge me as a Linux geek with no flexibility of mind, I use both Windows (and not *just* at school) and Linux every day and I think there is a place for both in the world. I just think Windows shouldn’t completely dominate it.

Sorry, I shouldn’t really just post with a link to another post, but this is such a big story to me that I want to:

Recently I’ve been playing around once again with VNC remote administration to and from my SUSE Linux box. The really cool thing is that TightVNC, the VNC daemon I am using sets up a mini web server with a Java applet so you can control your computer from any other PC with a web browser and JVM. Does seem a bit ironic then that the version of Firefox I’m using, version 1.5.0.1 which I installed via RPM doesn’t for some reason use the Java plugin (despite the fact that the Sun JVM is installed). I seem to have to resort to Konqueror to do that sort of thing. It’s probably a misconfiguration on my part, but it seems a bit strange.

Anyway, I hope to be doing some more real web development soon, so there should be some more interesting development news by then.

Oh I wish I had an MSDN subscription…

The February CTP of Windows Vista, build 5308, has been released and from the screenshots I’ve seen, it’s looking as awesome as ever. You can read more about the latest build at Gizbuzz.

I really wish I could get a chance to test out Windows Vista, because although I am a Linux geek as well, I still intend to use both the Windows and Linux platforms and remain proficient in both. Yes, Windows is irritating sometimes, but it should also be given a chance to change that; Vista is that chance.

No, it’s not online or live yet, but the new Hybrid site does have a screenshot you can look at. That’s all for now, enjoy. 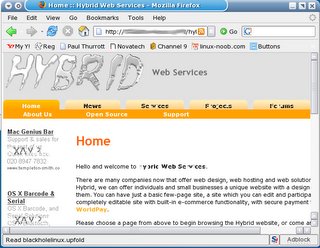 You may notice that I’ve changed the name of this blog to just Peter’s Web Development Blog. I think this not only sounds better, but it reflects the fact that this blog tends to be about my web development, and not a lot else.

Also, after my extended posting at Gizbuzz, I’ve been accepted as a team member there, so for the latest tech news, there’s no better blog than Gizbuzz. Make sure it’s in your bookmarks and subscribe to the Atom feed if you haven’t already.

A new Hybrid site is coming soon. As yet there’s no screeny, but it is an orange-grey themed design with rounded corner tabs for primary navigation and secondary navigation just under that.

I think the site looks awesome, and it shouldn’t be long now before it goes live.

Yes, it’s true. The new Hybrid website, with a completely revamped design is now under construction. A fairly major problem with the website management system has been fixed, and now it is only a short wait before the new Hybrid site will be released in all its glory (possibly even on a different server).

(Cross-post at the Hybrid site)

I’ve already done a major post at Gizbuzz about this story, so here I’ll reflect on my thoughts about it.

First of all, how can they remove Outlook from Home & Student Edition??! I think that is probably the application out of my copy of Office 2003 Student & Teacher Edition that I use the most, it’s set up for my primary email account. Does mean I’m locked to Windows to check my mail though.

Most of the editions I mentioned on the post are OEM or Volume Licence jobs, so they’re not the shrink-wrapped boxes that you’ll see in your local PC World.

I don’t like the fact that the UI is only being redone for some of the apps (I think it’s Word, Excel, PowerPoint and Access). It seems a bit weird to me to have major inconsistencies in the UI across the Office suite. Yes, I appreciate how big a task it is to completely overhaul Microsoft Office’s UI, but you get the point, hopefully.

Whew. Just managed to get the index, news and products pages of the latest Project Krystal build (version 0.9 RC1) to validate under the XHTML 1.0 Transitional standard. I think it’s a very good idea to validate, as it helps to ensure that your site works on as many platforms, browsers and operating systems as possible. I like, use and try to spread Firefox, but that doesn’t mean I’m going to lock IE users out of my site or irritate them with a browser-specific popup or something. If they want to use a browser with more holes in it than Swiss cheese, then that’s their choice.

This has been cross-posted at the Hybrid site.