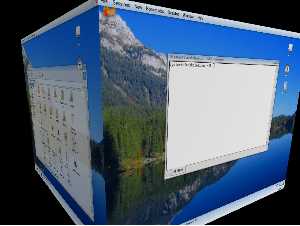 Finally cracked this age-old problem I’ve been having. I now have the Nvidia 3D drivers installed (working at a fairly decent resolution and refresh rate)! Doesn’t sound like much, well this problem has been bugging me for ever now (almost since I started using Linux). With the 3D driver installed, I can finally enjoy the wonder that is Xgl.

So here’s how I managed it…

END_OF_DOCUMENT_TOKEN_TO_BE_REPLACED

Into the coding jungle

Yesterday I decided to install SUSE 10.1 (again), but this time on my server/development computer to use as a Linux software development installation. Now I’ve done bits and pieces of Visual Basic.NET on Windows, but I never really quite got into it like PHP.

So I installed SUSE alongside Kdevelop and I’ve started messing about with C++. C++ is probably not the best language to jump right into, but considering I basically know the syntax from PHP … well, we’ll see.

So I’m trying to build a few graphical KDE applications as examples, using cplusplus.com as my guide to the basics. Wish me luck, because the C++ jungle is big. If I do successfully get a grasp, however, I’m sure knowing C++ will come in handy for whatever platform. And cross-platform is king.

Filed under Development, Linux | No comments

A quick guide to compiling stuff on Linux

I thought this might be worth doing: a short tutorial for Linux newbies on how to compile programs by source. Talk about jumping in at the deep end. I’ll do some easier ones as well, don’t worry. Anyway…
Generally, on non-open platforms, you never see the source code of anything (think of the source code as the ‘recipe’ for the program). Even on Linux you generally get new software packaged as shiny binary .rpm (or .deb) files.

However, on occasions you might want/need to compile a piece of software from source; sometimes your distro won’t have packaged that particular piece of software, or you need to install a new version that hasn’t been packaged yet. In this tutorial, I’m going to look at how you can compile stuff yourself (so click Read On if you’re on the front page).

END_OF_DOCUMENT_TOKEN_TO_BE_REPLACED

School is over forever and XP is back

Yes, it’s true. As of Thursday, I did my last exam so school is now officially over and I can look forward to a good holiday with a lot of coding. But enough about that.

I finally wrote my last Vista article (Digg it) and dediced to put Windows XP back on my computer, mainly because I wanted my applications to be installed again. See, having a multi-partition setup meant that not all my applications (in fact, hardly any) are on what Windows would call the C: drive. But that’s a different story entirely.

The main website project for Hybrid is back in full-time development now, and there will be things happening very soon hopefully. Stay tune.

Why you shouldn’t use laptops on your lap

I think the picture explains all. Apparently this Dell laptop blew up at a conference in Japan. And you thought Dell made good laptops, didn’t you? Read more at The Inquirer and UNEASYsilence.
[via]

Watch the World Cup – in text

Just seen a pretty amazing thing at the LXF Team Blog. It seems you can watch the World Cup on your PC. No, no, in pure text mode. It only seems to work when there’s a match on, so I haven’t had a chance to look yet, but I’m sure I will before the tournament is up.

If you’ve got a Unix-based system (Linux, Mac OS X etc), run telnet ascii-wm.net 2006 from a terminal, but do it when there’s a match on. Quality’s not quite as good as HDTV, no doubt.

In fact, Windows users should be able to watch as well, run a telnet program (HyperTerminal on XP??, or try PuTTY) and connect to ascii-wm.net, port 2006.

And here’s to my first real post on my blog in WordPress!

Welcome to the new home

If you’re reading this, you successfully managed to get to the new home of Peter’s Web Development Blog. That’s A Good Thing. I’ll be posting here from now on, and although not everything is quite in place here yet, that will slowly click into place over the next few days.

All my previous posts should be accessible, although there are some formatting issues that I’ll be looking into as well.

Well, wish me happy blogging at the new home!

Fear, uncertainty and doubt about Linux – no longer

Just found a great page which clears up a lot of myths and untrue allegations made about Linux and the open source software movement in general. If you’re unsure about Linux for whatever reason, then read it.

I’m not trying to say ‘Linux is for everybody and does everything’ here. It’s not and it doesn’t. However, for a basic web/email/office suite workstation, Linux will suffice. And servers… don’t get me started. Linux (or in fact any Unix-based platform) is awesome for servers, in my opinion. But that is only my opinion. Draw your own conclusions.

I’ve been doing yet more blogging about Vista. I’m going absolutely mad about writing reviews of each and every bit of Vista, and this time I’ve looked at some of the bundled applications included with the OS. Have a look, you know you want to.

Exams are finally beginning to come towards the end, just three more to go and I’ll be able to get on with a bigger project that should contribute significantly to my MacBook. More on that story as it happens…

And finally, to GRUB. So I installed Windows Vista Beta 2 over XP on my main system. You know that much. Well, as I said, Vista very diligently destroyed my previous dual-boot configuration when it installed.

So I needed to run Fedora again so I could reinstall the bootloader and get dual-boot wonderness back and running. So I tried booting from the Fedora disc. It detected the installation, but wouldn’t let me boot into it, only upgrade or reinstall.

I tried the SUSE 9.0 disc, which I know lets you boot an existing Linux system, to no avail. I was just left with a blank screen. So I gave up on that and decided I would need to run GRUB manually to kick Fedora into action. I found this tutorial about putting GRUB on a USB stick, but unfortunately it was written for Solaris and I’m not quite geeky enough yet to be bothered to modify it to my needs.

Then I found the official page on how to put GRUB on a CD-R. So I booted a Live Linux distro, followed the instructions and made an .iso, which I saved to a FAT partition. But, being in a Live distro, I couldn’t burn the disc, because obviously the OS had to be run from there. And I only have one optical drive…

So I rebooted into Vista. Vista didn’t have a built-in option for burning CDs, so I tried the freeware CDBurnerXP (that’s free not Free), which didn’t like Vista and couldn’t detect my DVD-+RW drive.

So eventually, I used another computer to burn the disc. I booted and entered the commands GRUB needed to boot Fedora, and found it wouldn’t work. It had some problem and then the kernel refused to continue.

Finally, after some Googling I found that you needed to use a Fedora-specific kernel argument to kick the kernel into action, and I booted in. After which, I had an exam to go to…

Don’t be fooled – I symlinked vmlinuz and initrd so you’ll probably need to press tab to see the list of possibilities and choose the appropriate and matching kernel and initrd. And don’t forget to substitute (hd0,6) with your disk and partition number.

Filed under Linux, Windows | No comments

My Vista Aero article on Digg

My Vista article about the Aero user experience is on Digg. Check it out, and Digg it please!