One month of self-hosting

Today marks one month of running this site from my own server! It really doesn’t seem that long to be honest, and apart from a couple of minor hiccups (which I’ll go into later), it’s been a very successful setup.

I’m very happy with the setup actually, but unfortunately recently we had a couple of issues. First of all, on Thursday my ISP decided to have connection issues with our local exchange, bringing the connection – and the site – down for several hours.

The other problem was that yesterday I woke up, checked the server’s Tripwire logs as I always do and noticed something very strange. Tripwire was reporting that something had modified all the system critical binaries and several libraries too (everything in /bin, /usr/bin, /usr/sbin and /sbin and most of /usr/lib). I couldn’t find a reasonable explanation for the modifications and had no idea what had happened, so I spent a large portion of Monday reinstalling the OS and porting the data back over.

I don’t know whether someone broke into the server (I can’t find any evidence of a break-in at all looking at the dump I did of the filesystem) or whether it was just some quirk in Tripwire or some change CentOS had made. Still, I didn’t want to take any chances so I reinstalled clean.

Still, I’m bemused. If anyone can shed any light on the issue or wants to help me analyse the data I have, give me a shout.

Anyway, back to the festivities. Woot! Here’s to the next month of self-hosting!

Filed under Development, Migration | No comments

Super-secret project development is coming along nicely. Due to unforeseen circumstances (that I may well explain a little later), I didn’t get quite as much time as intended today, but nevertheless things are chugging along very well.

No I can’t tell you anything more yet, but I’m sure everyone who reads my blog will end up with a beta invite anyway. 🙂

If you tried to get on the site yesterday at all, depending on what time you tried to visit, you probably didn’t get here.

Unfortuantely my ISP Tiscali experienced some heavy downtime yesterday, so I had no connectivity (and neither did the server). From looking at logs, I can estimate the downtime period was between around 2pm BST yesterday and 1am this morning.

Very frustrating for me, as it has been the first major downtime on the self-hosting setup (almost a month now) and there was nothing I could really do about it.

It also meant that last night I was unable to get any development done on The Project.

In town on a lunch break recently and as me and my friends walked past a travel agent, I noticed this: 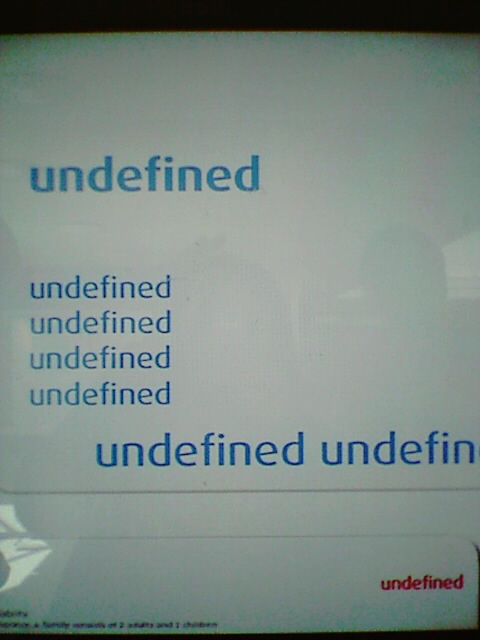 It’s on a little LCD screen which is supposed to display the latest great deals on travel and entice people walking by to come in, but apparently someone didn’t notice that a slight bug crept in.

Time is very precious. I’m currently working on a semi-super-secret (if there can be such a thing) coding project with my good friend Chris Van Patten. Hmmm… I can tell you this much:

I absolutely love coding. It’s absolutely great fun, but the problem is that precious resource known as time is so scarce. I have to keep blogging, doing all the stuff I have to get done and of course the very important task of staying sane.

If anyone’s bored and has a spare, oh, even just two hours in their day, please if you could lend me the time so you have a shorter day and I have a longer one I’d be very grateful.

The bottom line is – my personal coding projects here might seem to be inactive for a while. Rest assured that I have not forgotten about them, they should get some attention as soon as I have the time to spare!

Just upgraded this blog to WordPress 2.2. Nice and painless and I don’t think anything is broken, which is always good. 🙂

If you notice something not as it should be, please do let me know via the comments or by another method.

First WordPress upgrade on the new server. You get the extremely useful benefit of uploading the new core WordPress files at full LAN speed rather than over the internet, which speeds up the process enormously.

Sun Microsystems for the win

In essence, we decided to innovate, not litigate.

First they laugh at you…

What fun you can have by pointing a camera at a monitor displaying the video feed from that camera.

You can do this with VNC if you’re not lucky enough to have dual monitors. Beware though, you can lock up your system if you use VNC. So save stuff first. 🙂

I’ve been using Fedora as my main desktop OS for over a year now. It’s a very good Linux distribution, but every so often it is nice to get a change of scenery.

Also, I haven’t actually cleared out my KDE configuration files and started from scratch in over a year, which means things can get a little bit clogged up. FC6 on my desktop had been acting pretty slowly and I’m too impatient to wait for Fedora 7 to come out.

So, I’ve just migrated my desktop over to Kubuntu Feisty Fawn. Why Kubuntu? Because you can pry KDE out of my cold, dead fingers. Oh and because of this. And endless configurability. And the promise of KDE 4.

I still grudgingly am retaining a Windows dual boot system, but only just. The reinstall gave me an opportunity to nuke the disk and give Linux a lot more space than it did have.

So far, I’ve had very positive experiences with Kubuntu. Especially getting the Nvidia 3D drivers on – that was undoubtedly the easiest install of those drivers I’ve ever done. I don’t know whether it was clearing out a year’s worth of rubbish, or if it is Ubuntu, but it seems much snappier. Firefox and Thunderbird start-up times seem to have been dramatically reduced, as has boot-up (thanks to Upstart).

The funny thing is I set aside a whole weekend to get stuff migrated over and I’ve done most of it in an evening. Which involves reconfiguring stuff how I like it. Which usually takes quite a bit of time.

When Fedora 7 comes out, I’ll play around with it inside a VM and then re-asses my distro switch decision. 😉