It’s actually quite difficult to believe that my MacBook is 18 months old now. About a month ago, I noticed that mounting DVDs became unreliable. CDs worked fine, you put them in the slot, it span up fine and everything was good. DVDs, though, would take a long time to decide whether to read, involving a lot of spins up and spins down.

Eventually, reading DVDs became unreliable to the point of not working most of the time, and on Tuesday, since I could now do without the MacBook for a few days if necessary, I decided to ring AppleCare (I have the three-year Protection Plan) and get booked in to get it looked at.

I called the number and got through pretty much instantly. The guy on the other end didn’t sound like a native English speaker and occasionally was difficult to understand, but I got my message across quickly as to what the problem was. I got booked in at the Genius Bar at the Southampton Apple Store. It’s about 30 miles away, and I had to take two trains to get there, with a total journey time (including walking to the station and to WestQuay at the other end) of about 2 hours. 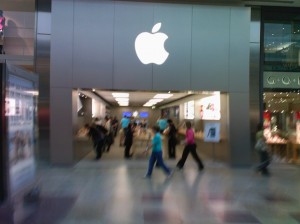 So on Wednesday I arrive at the Apple Store. Despite the fact that it was still being intermittent, in the sense of working, but being slow about it and making some funky noises, I was surprised that the Genius didn’t need much convincing that there was an issue.

It was checked in there and then for a new DVD drive (they call them SuperDrives, but for some reason I don’t like calling them that).

The one thing I didn’t like at that point is that the agreement you sign to give it away for service states that if you don’t let them take it, they apparently charge you Â£100 plus VAT. It’s labelled as a diagnostic fee, but really it’s a lock in to get service done with them if they think you need it. Well, fair enough, but that should have been disclosed up front, before the ‘diagnostic’ is done. This is especially important if you don’t have AppleCare, or you’ll be at the mercy of Apple’s repair prices, whatever they make them, or Â£100 odd and nothing done.

Anyway, it went off and they reckoned 2-3 days to get fixed, as they didn’t have the drives in stock.

The next day, in fact little over 24 hours after I checked it in, I get a call saying it’s ready for pickup. I headed back down and picked it up.

They even managed to handle the potential confusion due to the fact that it was bought in my dad’s name, but I alone did this whole process. I made this clear at the initial Genius Bar appointment, and it was subsequently well communicated between the staff for when I picked it up.

The result? I have a new … er, SuperDrive and DVDs work fine again.

Overall, a pretty positive experience. Just watch out for diagnostic fees, and don’t go to the Genius Bar unless you’re sure you can hand the machine over there and then for service.

An interesting footnote – they quoted that without AppleCare, the repair would have cost just under Â£200. Which incidentally, is what AppleCare costs. So, it’s already paid for itself, perhaps?

The photo is hideously blurry… but for some reason I like it.

The one time I actually go for installing a distro on a physical, real computer, rather than in my MacBook-powered Parallels virtual machine environment, it won’t work.

In attempting to install Fedora 9, Sulphur, on standard PC hardware (than runs Fedora 8 just nicely), I’m getting this after choosing to install from the DVD as the package source:

Admittedly, I haven’t yet checked the image checksum (I usually do before burning), so I’ll do that when I get back tonight and see if I can get to the bottom of the problem.

Ultimately, I’ll have to fall back to Parallels.