OK, I’ve been meaning to do this for a while. A while ago I started building a very small project in Visual Basic 2005 Express Edition (for Windows only, I’m afraid). It was basically going to be a Notepad replacement with some really cool features. It has got the really rubbish name of Text Editor, and I’ve finally decided to release what I’ve done so far to the community.

So here it is, fully open source and licensed under the GPL.

Get the installer here.
Get the source code here.

Enjoy, and I hope to make it even better soon. Use it at your own risk, though and it does need the .NET Framework 2.0.

I’ve started work on a new web development project. As ever, details at the moment will be sketchy. All I can tell you is that it’s codenamed Kite, and it’s going to hopefully be a next-generation instant messaging system (currently only by a web interface), but with an interesting twist.

I’m currently doing preliminary tests on the concepts behind Kite, and have already built a basic 2-user Ajax-powered messaging system, with more to come soon.

Stay tuned for info on Kite…

I know this isn’t a new story, but French police are switching their desktops from using Internet Explorer to Mozilla Firefox. They’ve also switched from Microsoft Office to OpenOffice.org. Now this is progress; c’est fantastique (sorry). France seem to be the only country in Europe to actually recognise there is an alternative to using Windows, IE and MS Office (hey, a new acronym – WIM). I’m not saying there’s anything wrong with using Microsoft solutions, I’m just saying that it’s wrong when everyone uses Microsoft solutions. It’s like putting all your eggs in one basket, although it’s already happened around the world (MS advocates/employees, I’m posting this using Windows and Firefox and have Microsoft Office Outlook open).

Also, the French financial government department are evaluating a move to their desktops to Linux. Considering Microsoft’s ad campaigns about “lower TCO with Windows”, you’d think financiers among all people would know about TCO, wouldn’t you? It remains to be seen what their decision will be.

Also, considering the latest draft law to open up DRM submitted by French MPs (see my previous post), it seems the French know where it’s at, and are pushing in the right direction to create open standards.

Open standards are great. Think about it; the only reason the internet is as popular as it is today is because it is based on open standards. TCP/IP, HTTP and HTML can all be understood and built into by any platform. Imagine what it would be like if one company controlled all these standards with, say, a patent. Open source would immediately be locked out for a start, if a patent was involved, and other companies would end up having to pay fees. People would have to pay this parent company to set up a website, to use their technology. We’d be in a mess, basically.

So make your choice about what solution to use. Choose the solution that is best for the job, whether that be a proprietary solution or an open source solution. But, please, be aware of the alternatives and if you’re pushing the next-generation internet, make it an open standard. Thanks, the [open source] community thank you, and it’ll probably be more popular too.

I know, I really should have learnt my lesson about cross-posting by now, but this is a quite interesting story that I found and posted, and it will be interesting to see what the response of Microsoft and Apple to this, as I’m sure they won’t like it.

As I explained, it’s Apple’s marketing strategy to lock iTunes to the iPod, and Microsoft’s to sell out their standards to hardware manufacturers, but neither will enjoy releasing source code, or whatever it is that the French law advises.

Still, in my opinion it’s a good move for the French to take, as there can be nothing wrong with having open standards that all platforms can tap into. Hey, it might even get WMA DRM and iTunes music on Linux…

It’s official – Fedora Core Release 5, also known as Bordeaux, has been released. I have been playing around with Fedora Core 5 Test 3 (the equivalent of the third beta), but now it looks like I’m downloading an additional 3 gigabytes (it comes on one DVD). At the moment there’s not enough seeders on the official torrent (yes, there are legal uses for BitTorrent you know), so I’ll probably wait until more people have downloaded it, and choose a time to download when there’s less people online, like tomorrow morning.

Anyway, can’t wait to (not) see the bugs they’ve fixed. Good work and well done to the community and of course to Red Hat to getting out a great OS.

Whew, what a day!

But, nevertheless, it was about an 80-90% success, and I’ll explain why. It was a simple web app to collect comments to go under people’s names in our school yearbook. Well, a problem I didn’t anticipate (and really I should have) was that we would have MD5 hash clashes. Not through the algorithm, but the fact that I only generated the hash from a secret word and the current timestamp. That meant that anyone who submitted in the same second as someone else was assigned the same hash, and, needless to say, this caused problems. I should have used microtime() instead of time(), and also used some other unique data to generate the hash. Ah, well, never mind.

That was basically it, that just caused semi-major problems, most of which I could manually deal with. Other than that, the system worked exactly as I planned it to, collecting about 110 comments.

So, learnt my lesson, use microtime() and some other data. I’m off to relax…

Yesterday evening I actually stepped away from gaming for a second to fix a fairly major problem with Project Krystal (which I haven’t talked about for so long, I better tell you it’s a Website Management System and it renders your website from a MySQL database setup).

The problem was in the way that some pages used data after the .php bit of the URL, for example: http://server/products/chainsaws.php/4. In either PHP 5.x (or our remote server setup), the $_SERVER[‘PATH_INFO’] variable wasn’t getting passed to the script, so I devised a slightly messy workaround:

Again, if anyone can do any better I’d love to see you add a comment with your code.

I haven’t posted for a while mainly due to the fact that I got a new game on Friday, Need for Speed: Most Wanted. Naturally I bought it for PC (“Real gamers choose the PC, real geeks choose Linux or *BSD”) and on my mid-range gaming system it runs well (i.e. it maintains more than 25fps) at full detail level at 1024×768. If you’re interested in my gaming box’s spec it’s:

So, nothing special, but it does me fine (I don’t really get hyped up about the difference between 30 and 75 fps, what human can tell anyway??). I’ll attach a screen, but I’m sure you clever people can use Google. 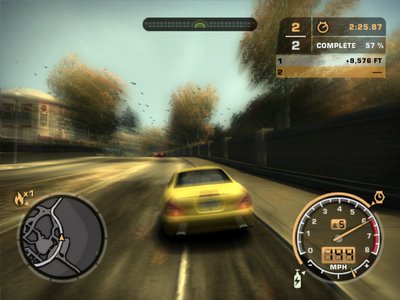 Hybrid is so close…

The new Hybrid site is so close now. The domain has been registered, the layout is almost done. Read the news here…

I’ve just started playing with my newly downloaded copy of Fedora Core 5 Test 3. It’s essentially the latest beta version of the popular Fedora Core distribution. I hope that at some point I will be doing a proper review of my experiences with Fedora Core for the first time, which I might submit to a few sites.

In the meantime, have some screenshots. 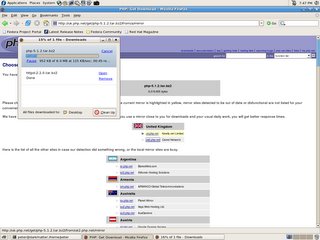 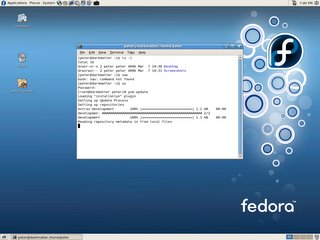 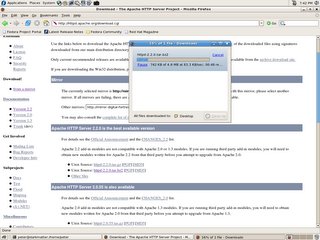