Adventures with WindowMaker and Debian

Back in my earlier Linux days, I would experiment and fiddle a lot with different setups for desktop environments and appearance, customising my Linux system to my heart’s content! An example: I loved the 3D desktop effects of Xgl/Compiz back in 2006.

Time moved on, and I ended up settling with the defaults that distributions provided. I liked Ubuntu’s direction with Unity, upon its release in 2011.

I have fallen out with Ubuntu and Unity more recently, however. The troubling privacy issues with the Amazon ‘lens’ and other changes to their corporate behaviour scared me off.

So, I moved over to Debian for my personal server and my Linux desktop systems, and I have been very happy with it. At the same time, though, I wanted to get back to my previous spirit of playing around with different bits of software instead of just going with the defaults and surrendering to a full-size desktop environment. Frankly, the way I use Linux means I don’t find an overwhelming need for a wide variety of graphical applications.

With that in mind, I have set up a very unusual, and minimalist, desktop experience, which I thought I would document a little here for those that might be interested. 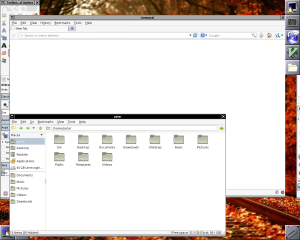