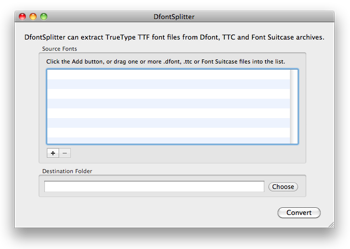 I’ve been busy beavering away in Xcode and I am now proud to release version 0.3 of DfontSplitter for Mac.

So, here are the release notes:

UPDATE 2011-05-09: While some particularly stubborn fonts do require this process, users who have previously experienced difficulty with older versions of DfontSplitter should first try with DfontSplitter 0.3.1 or later, which include a possible fix for this issue.

I think I’ve finally found a solution to this annoying error message that Windows gives when you use DfontSplitter to convert some fonts and then try and use those converted fonts in Windows.

It involves using a third-party open source application called FontForge to convert the TTFs that DfontSplitter gives you from a Mac-specific TTF format into ‘regular’ TTF format.

A full tutorial on using this method is included as a YouTube video screencast below.

If you can’t or don’t want to watch the video, essentially the process is:

Please do let me know if this process works for you and give any feedback — especially if you’d previously had problems using a .dfont you had wanted to use on Windows.